Uplands celebrated all the successes of our Year 6 children alongside parents at our leavers assembly followed by our Bring and Share event for parents, children and staff. It was a chance to say goodbye and wish the children good luck for the future. Please come back and see us and let us know how you are and what you are doing.

We also ran the staff versus Y6 football match to end the final day.

Today, all children in Year 5 were given the opportunity to learn some freestyle football skills from the fantastic Stephen Gray. Stephen started freestyling when he was around 14 years old and has since competed in numerous championships around the world, performed at some spectacular venues including the King Power Stadium and currently holds three Guinness World Records.

After a brief demonstration of his skills, it was over to the children. With determination, commitment, and a plenty of resilience, it was clear that we have some children who demonstrate a flair for free styling.

Stephen also ran a Lets Try session for parents and children. With a lot of laughter and collaboration, the children and parents looked confident and performing skills with control.

Finally, Stephen led a session after school for our talented Year 4 football team and a few other PE children.

Y4 visit to the Botanical Gardens

When we entered the Botanical Garden, we were greeted by a nice, elderly man called David. Then we entered a colossal hall and he kindly introduced himself and gave us fantastic activities such as shelter building. We went to see cute catfish. Then we went to an alpine greenhouse. The soil in the alpine house was dry although the plants still grew. In the tropical greenhouse, the weather was humid and in the afternoon, it was 30 degrees. When we went back into the hall, David told us some interesting facts such as the alpine plants can grow in cold weather and extreme wind.

Year 5 children visited Moat Community College on the 27th June for an exciting and interesting taste of life at the school. They were invited to participate in a STEM day (Science, Technology, Engineering and Maths) and the focus of the day was the importance of healthy eating and exercise. Throughout the day, the children investigated different aspects of the topic: testing different foods to see the nutrients they contain in the laboratories; making a prototype ‘fitbit’ (a piece of technology that tracks the number of steps a person takes whilst exercising); programming their fitbits in the computer suite; testing the fitbits and working out, mathematically, how many steps the children would have to complete to burn off all the calories from the food they eat. Finally, some brave members of the group presented a short presentation of what they had learned. Well done to them and everyone else who participated in this fun and interesting experience.

I had a really good day and particularly enjoyed running around the Astro Turf, testing the fitbit

I really enjoyed the part of the day when programmed our fit bits in the IT suite. It was fun entering the code.

Last Monday, children from Year 5 and 6 participated in the final basketball tournament of the academic year. Competition was fierce as always, but the children performed well, narrowly losing a few tightly contested games before finishing on high by winning their last game. This is also a nice opportunity to say farewell to Kevin, Tanisha, Zaid and Yakoub after their consistent participation in the basketball team throughout the year. All the best and we hope to see you competing for your high school teams in the near future! 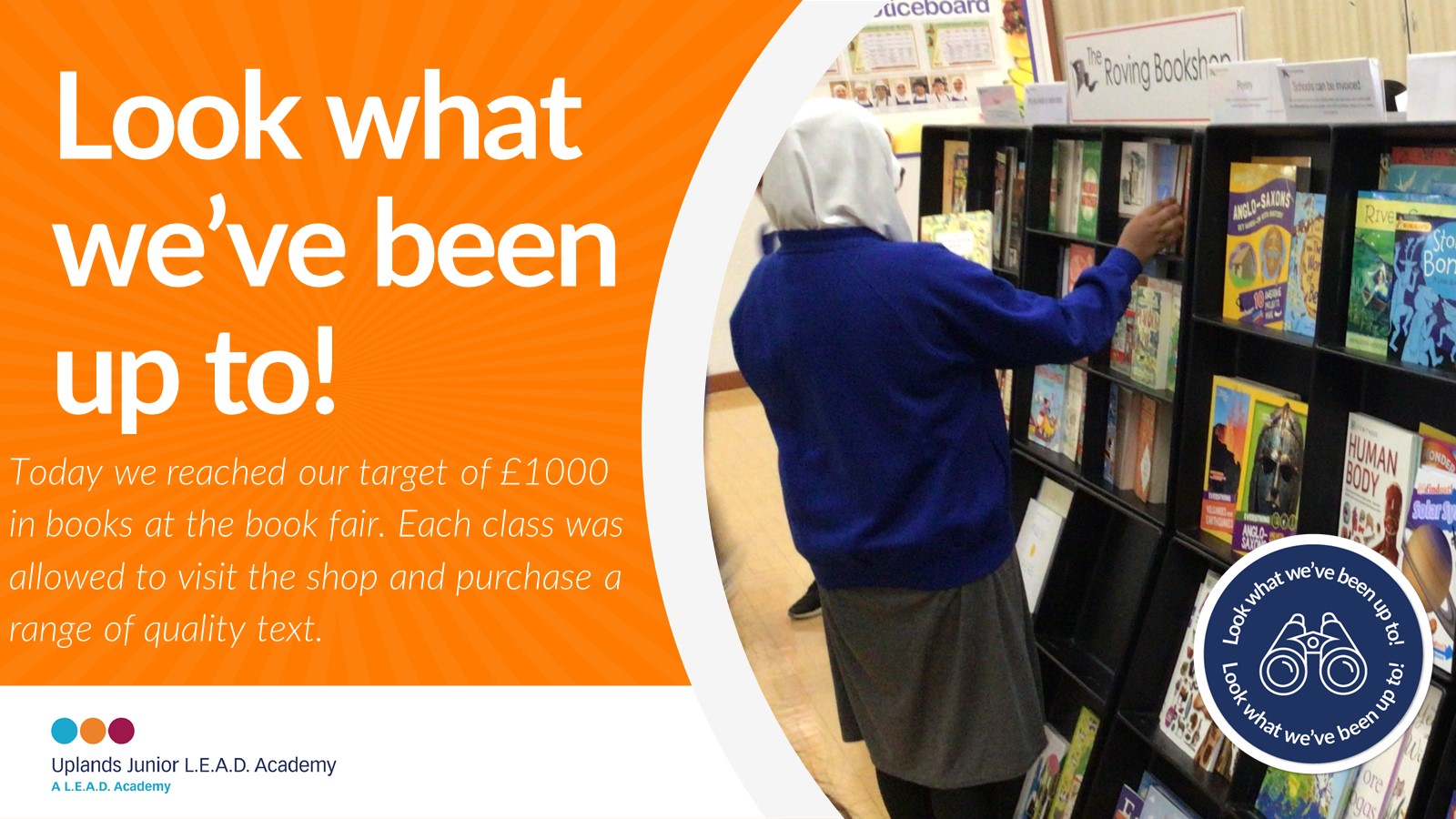 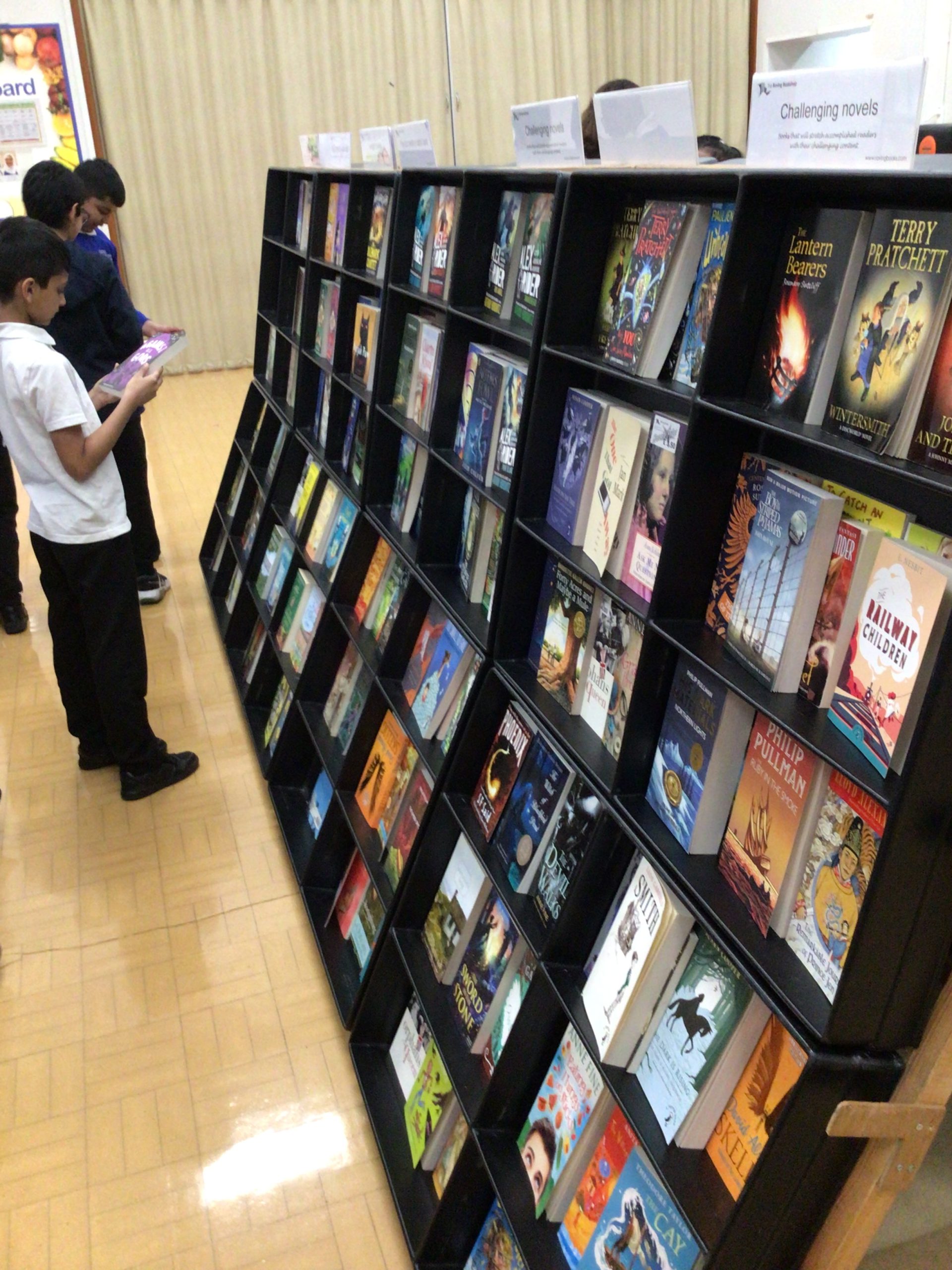 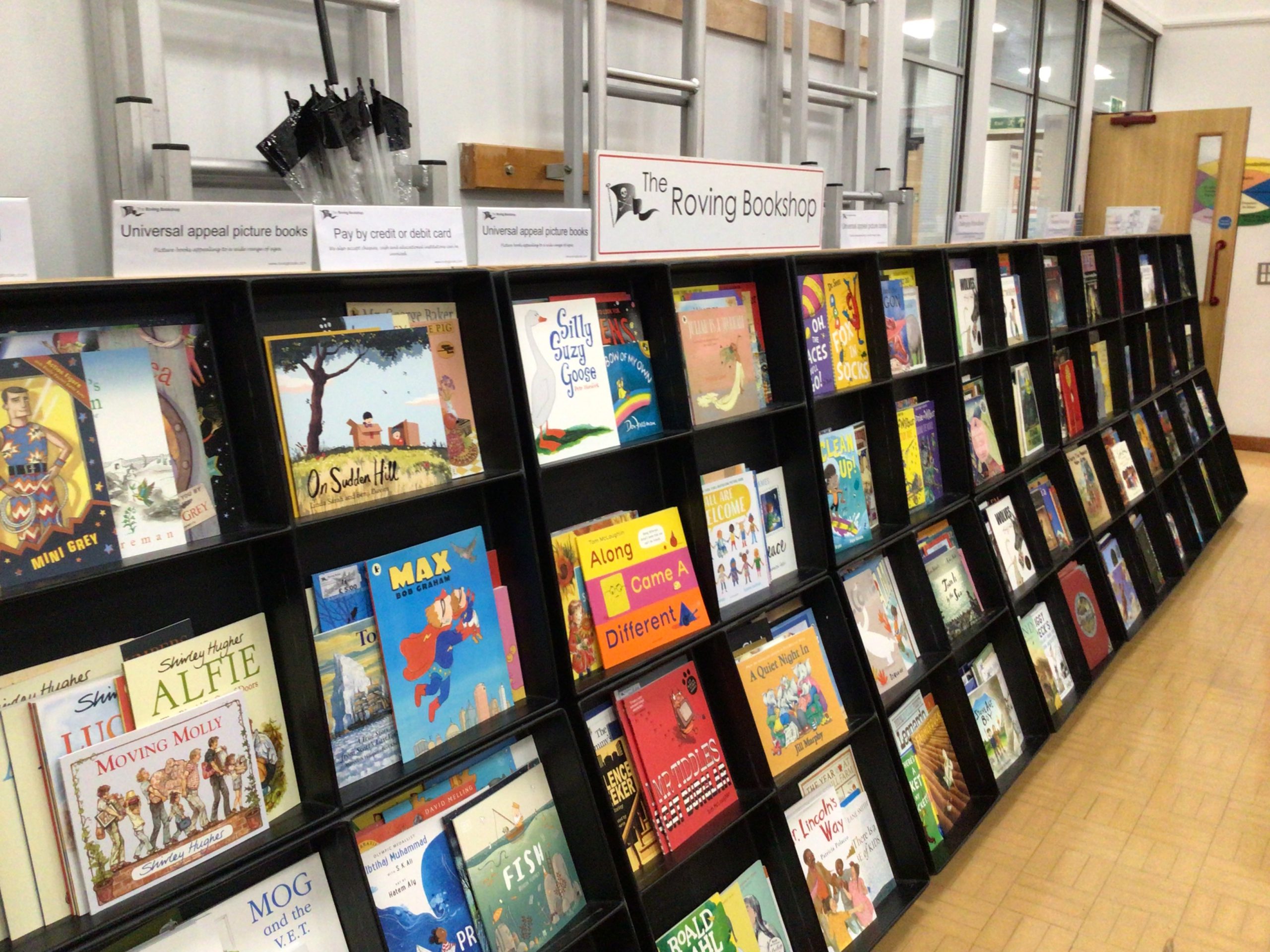 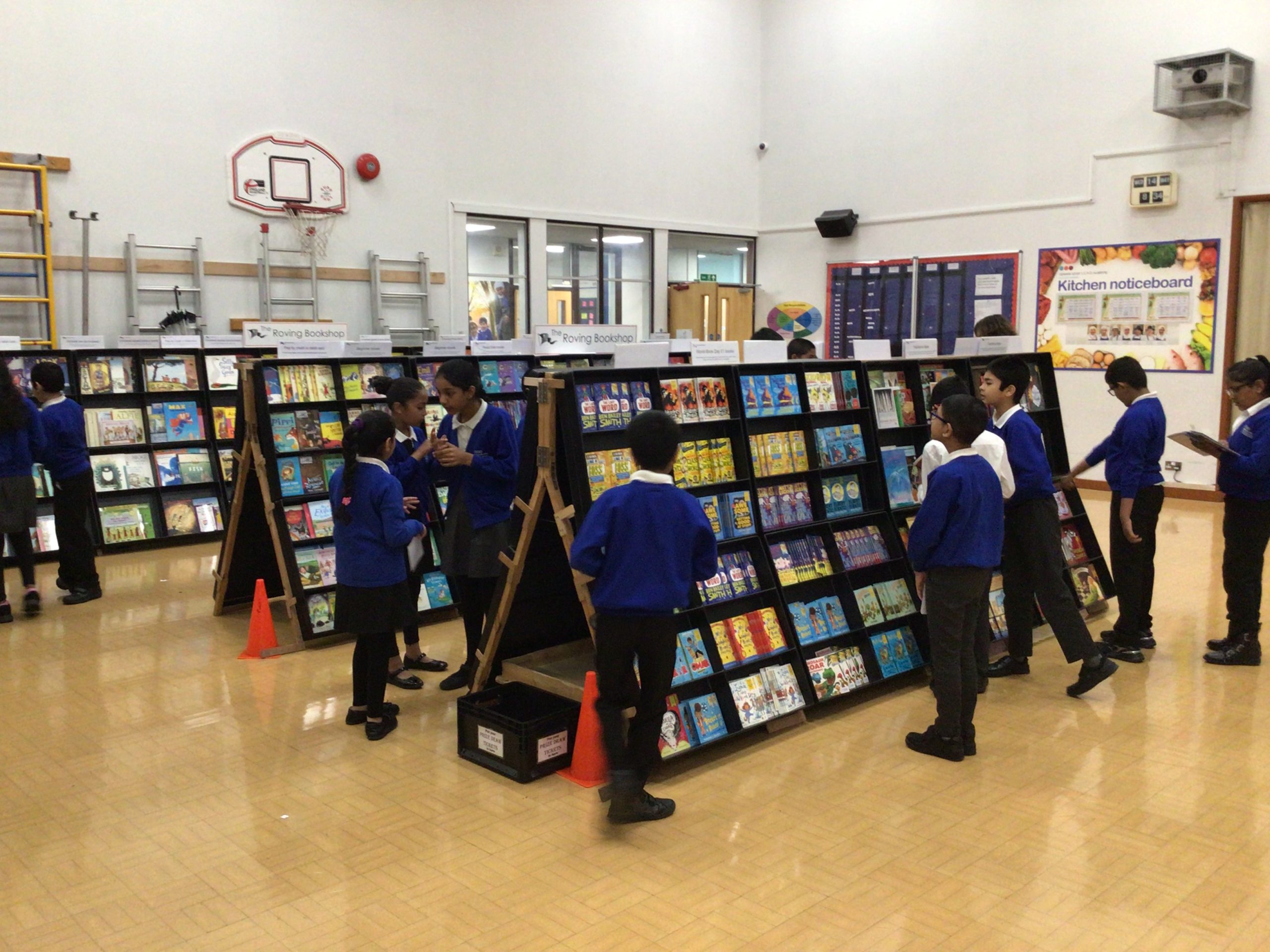 Our new reward shop is open!

Our reward shop is open! When children have filled a green dots card, they can visit the shop and choose a gift. Children earn green dots for excellent behaviour, work and effort.

Y5 visited Highfields Community Library this week. The library is so close to school and has an amazing range of books for the children to explore and borrow.

We were lucky enough to have Indie visit us during the summer term. There is plenty of research to suggest that reading to pets builds children’s confidence and fluency.

We celebrated the Queen’s Platinum Jubilee by wearing red, white and blue and having a whole school picnic lunch outside; the weather was dry. Thank you to Mrs Spencer in the kitchen and City Catering for the wonderful picnic lunches. Y4 linked their DT topic to this and planned and made their own food.

Thank you to all our children, staff and parents for making the school fair such a success. We raised £1700 which will be spent of the school library.

Thank you to all our parents who came to see a maths lesson in action this week. Your children really appreciate you coming in, as do the staff. We hope events like this help you to understand what we are teaching and help you to support your child’s home learning.

Partnership between home and school is essential for children to achieve success and to feel confident. We will hold more in the autumn term.

I enjoyed the lesson. The teacher method of teaching was very good. I am happy with the children’s learning in class. They ae progressing well. I am happy that I was invited into school. Thank you.

We really enjoyed the maths lessons together. I am looking forward to more lessons with my daughter. Thank you.

I enjoyed the lesson as it was full of information on the topic. There were lots of questions, which are beneficial for everyone as this helps us to recap over what had been learnt. The lesson was interesting, and everyone was engaged and focused which is important. I learnt a lot from this lesson.

In Year 4 last week we were able to visit the Ramgarhia gurdwara temple in the local area. The children enjoyed a leisurely walk through the park to reach the temple and were greeted by some very welcoming sheikh worshippers. Some of the children have included a recount of the event.

First we listened to the instructions and so we had to take our shoes off before entering the congregation hall. The boys sat on the right side while the girls sat on the left. They explained about Sikhism and then we asked some questions. Before we left they have us some chocolate and a view of the room where the holy book is kept. (Munawar, Sarah and Yusuf 4JD)

We felt very excited to see what happened and the Guru Granth Sahib because we have been learning about Sikhism and wanted to see it face to face. It is good to learn about and respect other religions (Maheera, Iqra S 4JD)

I liked the way the Gurdwara had lights around the Guru Granth Sahib. It was also interesting to learn about how lots of religions are mentioned in the holy book. The boys and girls sat separately but the man told us you don’t always have. (Rumaisah and Umama 4CS)

When we went to the Gurdwara we took off our shoes because we are like guests. They showed us where they cooked the langar (food) which they give to anyone who wants it. They can be from any religion.

In Year 4, pupils have been learning all about the Anglo Saxons this term. They have explored the different lands that the Anglo Saxons settled in or invaded such as Kent, Wessex and Northumbria. As part of their History curriculum, the children investigated how the Anglo Saxons lived, especially focussing on their living environment. Living in small villages that were built near a body of water such as a river or lake, the Anglo Saxons, built their houses made out of wood, wattle and daub (cement like substance). Also being near the water, would allow them to have access to clean water and food. Sitting in the middle of their village, the house of the chief would be larger than most as it would often be used as a hall for the whole tribe. Year 4 pupils were most alarmed when they discovered that Anglo Saxon children didn’t have any time to play, instead they were busy contributing to the group by doing jobs such as collecting wood, feeding the livestock and finding food. That’s very different to our children’s lives now!

Our pupils have loved designing and making models of Anglo Saxon villages and creatively sharing different aspects of the village. During this project, they showed great team work, collaboration and perseverance! You can see some of their wonderful Anglo Saxon village models here.

The children learned about the Chinese New Year in assembly this week, the myth that led to the selection of the twelve animals of the Chinese Zodiac and that 2022 is the Year of the Tiger. We also discussed the characteristic traits associated with each animal.

6CR made some red envelopes and decorated with Chinese writing. These envelopes are given with gifts of money to celebrate the New Year. The children also made some Chinese Lanterns.

Year 4 have made some lanterns to celebrate Chinese New Year.  They used weaving skills to create these beautiful read and yellow lanterns!  Lanterns hung at Chinese New Year are thought to scare aware the Nian monster and bring good luck.

Many thanks to Mrs Patel for all the practise in the corridors and to Mr Walker and Mrs Patel for taking the children to the event.

In January, our Dancers took part in the LCSSPAN Dance festival at Crownhills Community College, where East and West schools joined together to demonstrate what “Happiness is…..”. Their dance was energetic, and performed to Waka Waka. Well done to the girls who took part.

The new football league started at the end of January at Judgemeadow Community College. The team played their first game well and were leading right up to the end until a last minute goal in the dying seconds  saw the game end 1-1.

The next 3 games saw uplands on the defence throughout and whilst there were chances they all ended in losses for the team.

In the final game Uplands again managed a draw, thanks to some spectacular saves by Hamza, something that the organisers noticed.

For the first games of the season this has given the team something to build on in the coming months.

In recent weeks, a number of children have participated in two basketball tournaments and, I am very pleased to say, they have given a fantastic account of both themselves and the school with their attitude and application to these events. Unfortunately, the standard of competition is very high and we did not manage to win either of the competitions, but, as every good sportsperson knows, it is not the winning that counts, it is the taking part.

The school will open on Tuesday 04th January 2022.

To minimise our risk to infection:

You will be notified if there are any changes.